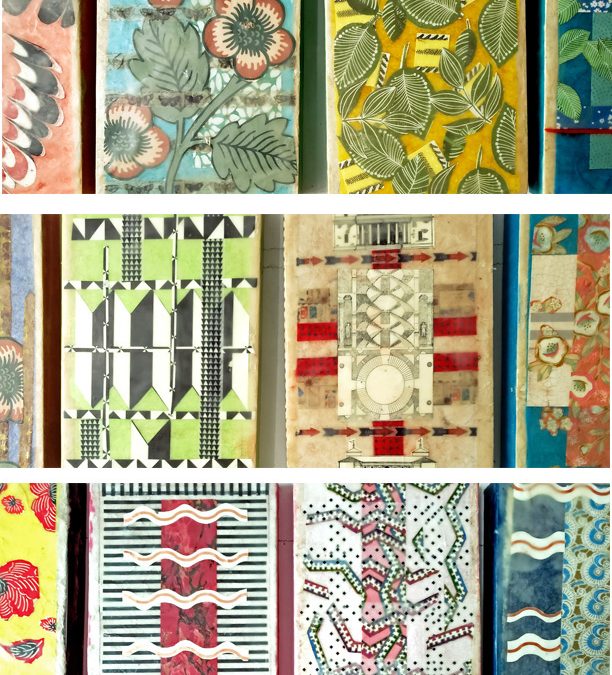 In the new year I had been thinking about the Victorians and their decoupage traditions…filling
the void with sentiment and changing functionality into décor. I am interested in the way that they
found the ability to combat subjugation with practice.

My Mother died on Feb 24. Although there were five grueling weeks of hospital, it was relatively
sudden and unexpected. I was able to say goodbye. And the world shut down three weeks later.
As we headed into lockdown my grief threaded its way into the fabric of the creative process.
I started snipping paper, laying tissue, mounting, gluing, sanding, gluing, sanding, gluing, sanding and
finally waxing. With a lot of time, anxiety and boredom became a preoccupation with making more and
more panels, reaching toward finishing another row.

As a result, the panels provided me with the loss of consciousness that making can achieve. Coming back to the present and looking at what the hours had produced with no memory of the design. This disassociation is cathartic and mitigates the daily triggers.

This is unlike the work that I usually do. It is not about personal narrative, nor purge, nor observation.
This is boiled down, an array of problem solving and basic craft that allowed me to let go of one panel
and get on to the next one. It is filled with sorrow, rage, fear, powerlessness, uncertainty, repression and
isolation, but in actuality it is simply a beautiful grid. The Victorians would have approved.